And I’m back. This is part four of my documentation of my family’s trip to the Middle East. Check out parts one, two, three, five, six, seven, and eight. We were just saying goodbye to Dubai and heading off to Jordan.

We loaded into a couple of taxis and headed off to catch a bus from Dubai to Abu Dhabi courtesy of our airline. We had to check into our flight at the bus terminal. There we were told that my dad couldn’t check in because his ticket was under my last name and not his. Um. Sure enough, through reasons I’ll never completely understand, his last name was not correct. The lady reassured me that it would all be fine, “Madame,” we would be able to fix it in Abu Dhabi.

We loaded onto busses and my daughter was super pleased to find that the busses were equipped with seat belts.

When we got to Abu Dhabi, my dad and I headed to the airline’s headquarter office. There we were reassured that it would be no problem, “Madame,” we should simply head downstairs where someone would change the name for a small fee. Great! At the downstairs office, we were confronted with a young person who continually reassured me that there was no problem, “Madame,” but who never seemed to be actually accomplishing anything. Time ticked by and by and by and by. After several consultations, he looked up and told me that he had successfully canceled the ticket but that he would not be able to put my dad on the flight because the flight was booked.

I  took this news calmly and stressed the importance of not leaving my dad in a different country. In the meantime, I began getting frantic texts from my sister and husband that our plane was boarding. I’d still not gone through security. After being told that they were very sorry, “Madame,” but that there was nothing they could do and that they might be able to get my dad to Jordan in a few days, I  gently explained that a few days was not going to do it. They looked at each other and then figured out a way to get my dad to Jordan. He did, however, have to stay for 9 hours in Abu Dhabi until the late flight. I tore through the airport, like the crazy person they all thought I was, and jumped on the plane at the very last minute.

When we landed in Jordan, we picked up the rental van that I had intended for my dad to drive. I was still pretty upset about my dad. The rental guys told us that the van was manual. I knew I didn’t want to drive and my husband stepped right up to the plate. I vaguely wondered when the last time he drove standard was, but brushed it aside. My sister, who’d been living in the Middle East for about a year and driving standard the whole time, offered to drive. But my husband was super excited about driving.

We loaded into the car and my husband pulled out of the space…and hit another car. Then he stalled out on the speed bump. Then he ground the gears when shifting. He took a 180 degree turn at high speed with squealing wheels and the swerving and my screaming. It was incredibly scary. After an hour and a half of the most terrifying ride of my life, we arrived at our resort where everyone fled in different directions to decompress. Fortunately for us, the resort was at the Dead Sea and it was incredible. 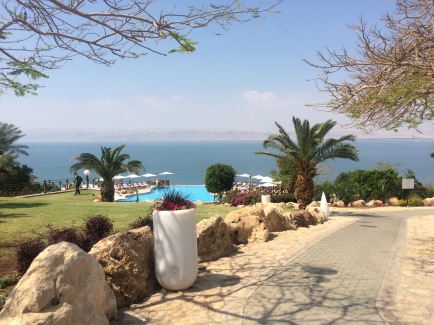 Cascading pools all the way down to the Dead Sea beach, 410m below sea level 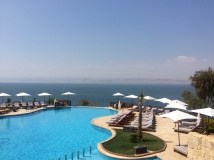 Mr. Toad and the kids cooled their heels by the pools while I added my dad as another authorized driver and arranged a private car to bring him to the resort in the middle of the night. We weren’t about to risk another ride with Mr. Toad.

Mr. Toad with the Dead Sea in the background 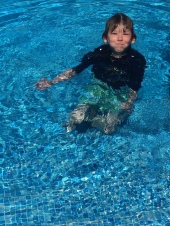 Hippy splashes in the relative safety of the deep end

We really did have a wonderful time at the Dead Sea. It was an incredibly nice resort. March seems to have been the off season, so there were hardly any people there. My dad was delivered safely to us in the middle of the night and we spent the next morning lounging around the pools and enjoying the Dead Sea. 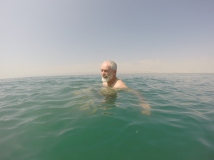 He didn’t walk on water, but he did sit.

Pretty sister with the Scholar in the background

Go Pro for the win

I mean, really, what a view!

We had originally planned to head to Petra that morning, but we changed our plans and booked a hotel in Petra for that night. This allowed us to hang out at the Dead Sea and then hit up the Baptism Site of Jesus before heading south. It was a good plan as you can see from our happy faces. 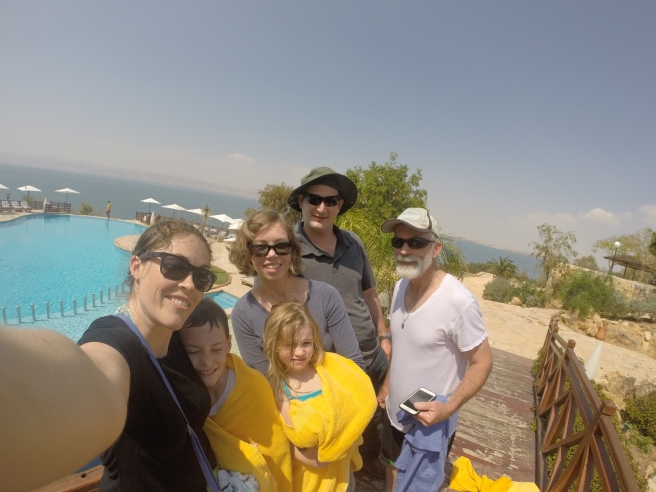 “We will miss you, Dead Sea, but Bethany-Beyond-the-Jordan is calling!”

5 thoughts on “Mr. Toad’s Wild Ride to the Dead Sea”